LOVE TRUMPS HATE
Wake Up and Take a Stand for love: Who’s with me? 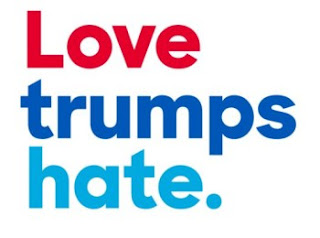 Some people I love voted for Trump. Family and friends. And I don’t mean random FB friends. They don’t fit the Trump profile. They are not all white. They are not misogynists. They are not evangelical Christians. They are bright and well educated. They love their daughters. Yes?! They have daughters. And, yes, that stumps me, too!

And, yes, I am well aware that you may be re-evaluating who you think I am because I know and love some people on the #trumptrain. Especially now. Now that I and almost everyone (else) that I know and love is some combination of shocked, devastated, heartbroken, scared and/or F-cking furious.

To clarify, I didn’t grow up in the Blue Coast Bubble. I grew up in the opaquely saturated red state of Oklahoma. Clearly, the lens is pretty different there. So as comforting and convenient as it might be to label “them” as hateful, bigoted, crazy misogynists, the truth is not that simple. Because the truth is never that simple.

I will not speak for them – cannot speak for them. But I have spoken with some of them. (They are definitely not all interested in talking politics with me.) I cannot agree with them but I can understand them. Because I dared to listen to them without ASSuming I was better or smarter than them. I cannot say that I entirely understand their positions or that I am swayed by them. I can say that I feel less devastated and more hopeful because I was able to have a civilized conversation with a Trump supporter as the election results were rolling in. In realtime.

Like a lot of us, I was anxious on election day. I cried when I voted. Normally, crying is not really my thing. Let’s agree on one thing: there was nothing normal about this election cycle. When I got home around 6pm, I immediately turned on the computer to see what was happening in the election. I had had a nagging concern that had been developing over several days. Brexit kept coming to mind. The polls might have been way off. My Blue Coast bubble was about to burst. Interesting feeling to be shocked and not surprised all at once. I was in multiple WTF text conversations with friends because I couldn’t bear to be alone in it. A girlfriend called in confused horror: What is happening? We talked for a while, listened to the news, texted our friends, pretended to be fully present as we distracted and consoled ourselves with our oh, so easy multi-tasking technology. Because the news was presenting some increasingly not-so-easy-to-digest information.

And then I did something really stupid. I sent a text to a friend in Florida. “fucking florida.” Like blaming Florida was gonna make me feel better. Like engaging my Trump-supporting friend in this particular moment was gonna be constructive in any way. Banter turned into talking points, heading South in a hurry. Not surprisingly, we don’t even agree on the facts.  So I called him, not sure he would pick up the phone. He did.

Honestly, past experience told me this conversation was going to go badly and end abruptly. But I was desperate to make some kind of sense out of it.  I wanted someone who voted for him to give it to me straight in that way that you can only bear to hear from someone you really know well. I needed a heart-to-heart. And I got one. When I really needed to believe that we are bigger than our differences, I got exactly what I needed. For two hours, we talked and we listened. And we talked and we listened. Without a moment of raised voices or cheap shots, we heard each other.  Not just heard each other.  Felt the source of our mutual concerns. We hung up the phone and I listened to Trump’s acceptance speech. And I cried. Again.

For now, I am awake. And I am so clear that anger and fear lead to hate in equal measure. No one gets immunity. The only thing I know for sure is that impossible conversation on the night of the election was made possible because we both knew that we were in a fragile state; we both knew that we had no option but to listen with kindness or come unraveled. And we revealed to our selves the deeper truth that we ARE bigger than our differences, that love trumps hate. We have to grow up and wake up. We cannot go back to sleep.

I know some people are really angry and scared and sad. And that’s understandable. Others don’t get it at all. And - tough news – that’s also understandable through their lens. No one can ever make you wrong about your feelings. And that’s universal. We can’t swipe left and make it go away. We can’t #Calexit. We are not moving to Canada.

As a nation, I know that we are better than this. As an individual, I am taking a long, hard look at how I am better than this life I am living…. Not in an egoic I’m so great or above it all kinda way. Rather, I am asking the questions: What does my best self do? How do I quell my own anger and fear? How does love respond? What is for the greatest good? Where do I need to do better? What part of me needs to grow up, wake up and stand up? What does positive action that unites us even look like?